Please take a few moments and fill out this short form

Your Namejackpar55@gmail.comThank you for your time All website owners that want to make money online know that after creating the website comes the challenge of making it visible in the search engine results page. For your page to be visible means it has been properly optimized but SEO (Search Engine Optimization) can be quite difficult unless you are a pro of course. So, to have higher ranks, there is SEOPressor Connect, a premium WordPress plugin.

What is SEOPressor Connect?

SEOPressor is a plugin for WordPress that helps you take control of your search engine results ranking. Creating great contents is never enough, you also have to optimize your website to increase website traffic and traffic is money!

There are millions of websites out there and you have to make yours more search-friendly by proper optimization and link management in order to outrank others. 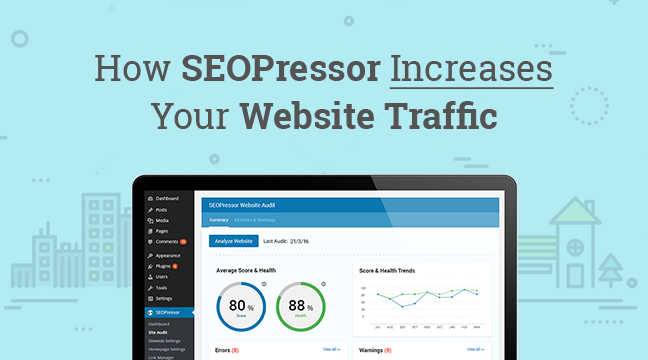 SEOPressor Connect is very popular and trusted by thousands of website owners, it has 5 core pillars that make it a premium WordPress among various plugins. The 5 pillars are:

1. On-Page Analysis – This displays real-time score of your On-Page Optimization and can help you understand your progress, even if you are a complete beginner. It gives you instant feedback and optimization suggestions to improve your On-Page SEO signals and will help you prevent over optimization.

2. SEO Intelligence – It gathers your website’s most essential SEO insights and displays them in one place, saving you time and effort to browse through different analytics just to see what is wrong. This feature alerts you if there is something wrong with your website.

3. Semantic Builder – Lets you organize the most important markup standards and can improve the search relevancy easily.

4. Crawler Control – This will help you decide how search engines can crawl and navigate your website, gaining complete control.

Who is the Creator of SEOPressor Connect?

Daniel Tan developed and launched SEOPressor Connect and he aims to make it the best plugin for all your WordPress SEO needs, making very useful features to ride with the constant changes of SEO.

How to Use SEOPressor Connect?

With SEOPressor Connect, you can focus more on creating engaging content because it will handle all the optimization needs to boost your website ranking.

Once installed, SEOPressor creates its own menu in the WordPress Dashboard. You will have eight relevant options in your menu: Site Audit, Sitewide SEO, Homepage Settings, Link Manager, Score Manager, Role Settings, Plugin Settings and Tuts & Support. All of these options are helpful, one displays the general state of your website and can analyze and update your SEO results at any time.

There are options that you need to configure like your company/business information, the title of your page and its description. Just fill out necessary details. You don’t need to worry because the settings are easy and understandable. The important thing is you don’t need to worry about optimization of your content anymore.

1. It has the most complete toolkit for on-page SEO!

2. It is like having an SEO consultant as your assistant, directly notifying you of the best optimization opportunities.

3. Know your site’s SEO condition at a glance.

4. It supports multiple domains with just one license.

6. You will have online support; your queries will be answered within 48 hours.

8. It has a lot of valuable and relevant features compared to other WordPress SEO Plugins.

3. It does not work with WordPress.com free blogs because they do not support plugins.

SEOPressor Connect makes you feel like a total expert in properly optimizing your site even if you are a complete newbie. It has lots of powerful features that will greatly help you achieve better traffic and higher rankings. This revolutionizes SEO and can accelerate your money-making opportunities. With this plugin you can concentrate on creating great contents that your visitors can engage to. Plus, it comes with a lifetime of FREE updates since SEO factors are constantly changing.

To avoid the grueling task of keeping track of everything in your page, have this plugin, because this is exactly what you need. It is easy, complete and shows real results!